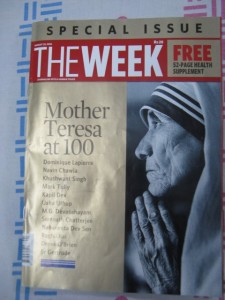 The Week dated Aug 29, 2010 celebrates the birth centenary of Mother Teresa.  It has brought together articles on the saintly woman by eminent writers.

The Sangh Parivar has often accused Mother Teresa and her Missionaries of Charity of converting people into Christianity.  I would like to quote some of the writers in The Week on the issue of Mother Teresa and religious conversion.

Let me start with Somnath Chatterjee, former Speaker of the Lok Sabha.  “… Mother Teresa was not a religious figure.  She was first and foremost an extraordinary human being who worked for those sections of Indian society that are usually not cared for.”

Let’s not mistake Chatterjee’s assertion about Mother being not “a religious figure.”  She was certainly very religious.  Jesus was her inspiration and it was her faith in Jesus that sustained her, as she herself said time and again.  But Chatterjee is right too.  Mother did not let her religion interfere with her work directly.  She saw people not as Christians or Hindus, Muslims or Sikhs, but as human beings.

Navin Chawla, former chief election commissioner and biographer of Mother Teresa, says in his article: “She was criticised for encouraging conversion to her faith.  Yet, in all the 23 years I knew her, she never once whispered such a suggestion.  However, I did ask her if she did convert people to her religion.  Without a moment’s hesitation, she said, ‘I do convert.  I convert you to be a better Hindu, a better Muslim, a better Protestant, a better Sikh.  Once you have found God, it is up to you to do with Him as you wish.’  She believed that conversion was God’s work, not hers.”

Chawla goes on: “It was said that the children given for adoption were baptised.  Yet, only those children intended for Christian families are baptised.  Ninety per cent of children still go to middle class Hindu families.  For Mother Teresa, baptising such children would have been a sin which she would never have committed.  In the Home for the Dying, the last rites continue to be performed according to the faith of the inmates.  Muslim bodies are handed over to the local ‘anjuman’ for burial.  Christians are buried according to the rites of the church.  All others are cremated.”

Mother was not in favour of Chawla writing her biography.  Chawla asked her, “Why, Mother?  Does one have to be a Catholic?  Can’t a bureaucrat and a Hindu write?”  He says he immediately regretted his words “because she had never discriminated about religion.”  He fell into an embarrassed silence, he says.  But Mother soon allowed him to write the book.

Raghu Rai, one of the best photographers in India and author of Mother Teresa: A Life of Dedication, says in his article, “I was close to Mother but I never felt that she preached Christianity.”

Mother had the habit of giving away Christian medallions or crucifixes to people irrespective of their religion.  It is easy to misconstrue this as an attempt to convert.  Dominique Lapierre has this to say in his Week article: “Mother loved giving away medallions whenever anyone met her.  I, too, received many medallions from her.  I have all the medallions she gifted me.  The other day, I weighed the entire collection.  The total weight of my Mother Teresa medallions is one kilogram.”

What Mother wanted of people was simple goodness and humanity.  What she told Khushwant Singh makes clear her view on religion and god: “Khushwant Singh says that he does not believe in God, but I think he is closer to God than many people.”

There is a ‘home’ (institution) of the Missionaries of Charity a kilometre away from where I reside.  The gatekeeper of that ‘home’ is a Hindu named Krishnan whom I meet quite frequently during my evening walks.  He has remained a Hindu for all the nine years I have known him.  I have never dared to ask him whether the nuns ever tried to convert him.  When I broached the topic of conversion to a couple of the nuns from that ‘home’ while they honoured me with a visit two years ago, the nuns avoided the topic.

I don’t know if any of the Missionaries of Charity indulge in religious conversions.  I hope they don’t, except in the sense Mother meant conversion.  Otherwise they would be doing an injustice to their founder.

My more regular blog can be accessed at www.matheikal.blogspot.com
View all posts by Matheikal →
This entry was posted in religion and tagged india, missionaries of charity, mother teresa, religious conversion. Bookmark the permalink.